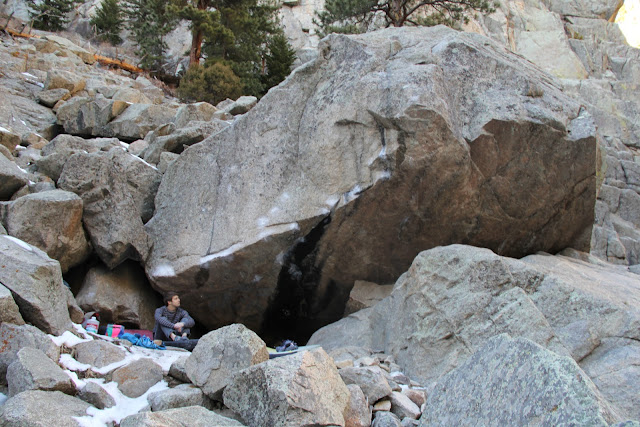 My friend Emma lives in Louisiana and knows almost nothing about Climbing. The first time she heard about it was four years ago when I made an ecstatic long distance phone call my senior year of high school to tell her I’d started. We’ve been close since then, but despite my bi-weekly rants to her about it, I’ve always had this lingering feeling that I haven’t fully conveyed something essential to her, one of the simple truths that binds me to climbing, and for that I feel like I’ve failed somehow. So I hereby commit this piece to you, Emma, and I promise to do my best to explain why climbing is never just about climbing. 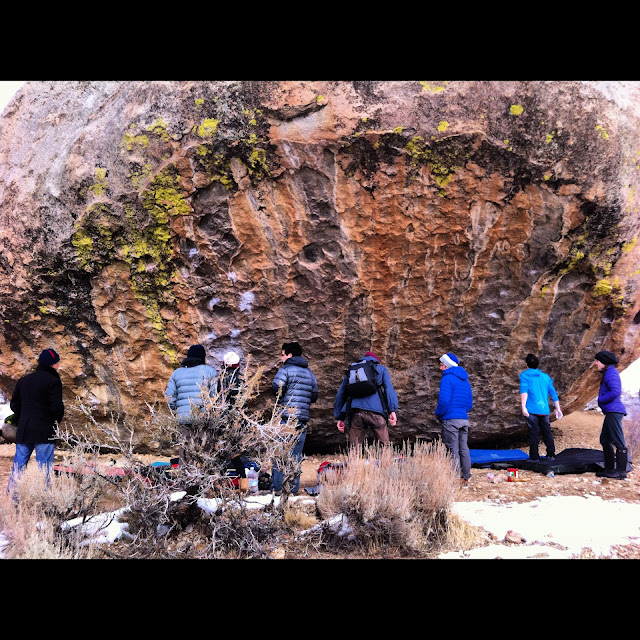 For the past four years, I’ve called myself a climber. Other people in my life have begun referring to me as a climber. When my parents talk about me to their friends, they say things like Our son goes to school, he writes, he falls in love, and he’s a climber. No, no, he hasn’t done Everest, we’d never let him.

As climbers, we’ve all answered these sorts of questions and we’ve all had to explain to people that Climbing is not really what you see in films like Vertical Limit or Mission Impossible II. We’ve all messed with tourists who ask us questions like, What’s that on your back? Is that your bed? You planning on sleeping up there? Oh you climb, have you ever climbed El Cap?

I won’t get into the sorts of obnoxious answers I’ve given to these not-so-ignorant questions. I think what people are really asking, and what my parents’ friends are really getting at is, Why climbing?

I give my Dad a lot of shit because he watches Glee. He also enjoys So You Think You Can Dance. I remember one night, while I still lived at home, I was watching another episode of Scrubs when my dad came downstairs, wordlessly took the remote, and turned on Glee. Why do you watch such an obviously overrated and ridiculous show, Dad? He gave me an answer immediately, but to be honest, it didn’t matter what he said. My mind was already made up: Glee sucked, and my Dad was a loser for watching it.

The other night, I was over at my friends Kris and Kati Peters’ house watching The Dark Knight Rises after a long training session. When it was over, Kris went to bed and I stayed up with Kati and Alex, and together we started scrolling through the channels. I went to the bathroom and grabbed what was left of the Half Baked ice cream out of their fridge. I was looking for a spoon in the kitchen when I heard it. There was a girl singing Silent Night on the TV, and it was absolutely amazing. Kati promptly changed the channel and landed on Friends. Wait, wait! Go back to that! Who was that? That was beautiful. Kati and Alex both looked at me, looked at each other, then proceeded to laugh uncontrollably.

Why are you guys laughing? That was really good. More laughs. Dude, go back to that! We’ve already seen this episode of Friends. Alex, more laughs, that was Glee. Silence. Dammit. Why do you want to watch that?

I stood there, pint and spoon in hand, wishing I could take back the last thirty seconds. Then an unusual wave of maturity came over me and I felt compelled to capitalize on it. All my life I’ve been told that I am more like my father than I might like to think, and I’m not just talking about our chiseled facial features. In that moment, standing in front of two people I barely know, I gave the same answer my dad gave me all those years ago:

At first, they continued laughing. I’m not sure if they got it, but I certainly did. It had taken me nearly five years to understand how utterly brilliant my dad was for saying that exact same thing. Apparently, my mom had told him the same thing once when she was watching So You Think You Can Dance and he wanted to change it to watch the news. That’s how he learned his lesson. She’s always been a bit more advanced than us. 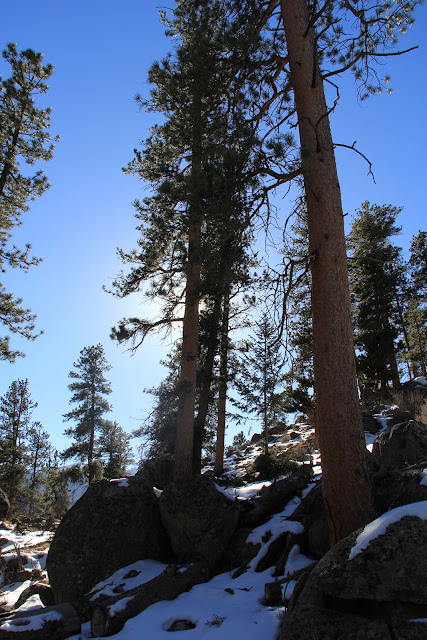 Emma, for as long as we've known each other, you've known me as a hopeless romantic incapable of making any logical decisions, someone who routinely finds some random thing or activity to obsess over, at least for a short while. One of the most valuable things you've ever given me is a new perspective. You live your life very differently than mine, and by that I mean, you make decisions differently. You're not a hopeless romantic by any stretch of the imagination. And I don't want you to be. Instead, I want to convince you that Climbing isn't just about climbing, that this time, I'm not just acting on impulse.

For the longest time, I've struggled to find something worth investing all of me into (besides God, family, friends, and all that good stuff). I'm talking about something more individualized and specific to me. Maybe that's selfish. I don't know. I tried soccer, writing, photography, girls, etc. I tried everything. Nothing was sustainable in the ways I needed it to be. I wanted to find something in this universe capable of adapting with me as I grew and sucked and learned. That's when I found climbing. Sure, I'm choosing to see this activity in very naive terms, but it's a subjective sport so I can do whatever the hell I want with it. I think it's awesome that I can pour every ounce of me into something as unique and endless as rock climbing. On any given day, rock climbing can be a venue for literally anything! That sort of endless variety and compatibility is so valuable to me.

Climbing forces me to butt heads with myself and look objectively at why I am the way I am. Without honest self-reflection, there is no progress (i.e. growth) in life (climbing).

Climbing is my medium for said growth.

I choose to climb because it demands more from me than just me. I enjoy climbing the most when I am trying as hard as I can on a beautiful boulder problem. Consequently, the more and more time and effort I put into climbing, the things that appeal to me just keep getting harder and harder. In climbing, growth takes for-fucking-ever. Just because I’m getting physically stronger, does not at all mean that I’m growing. And that’s the best part. 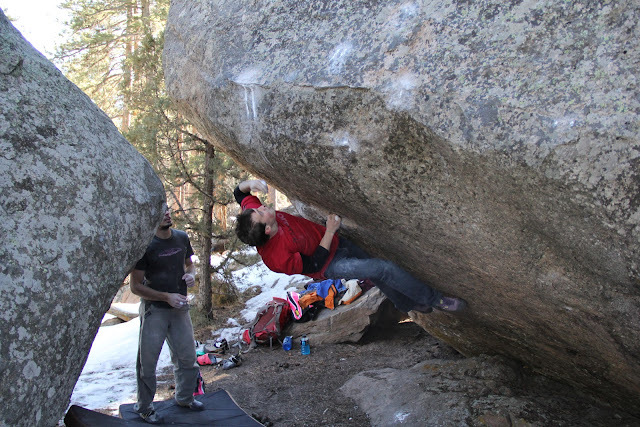 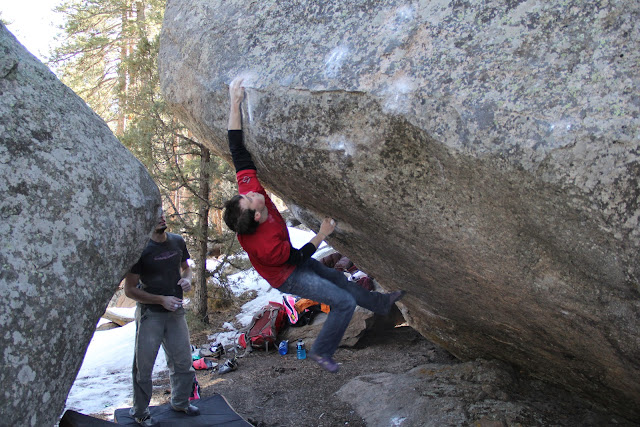 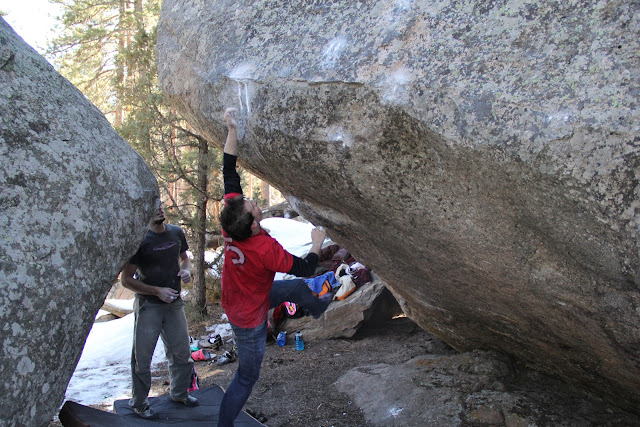 I climb because I am constantly pushed outside my comfort zone into other people’s perspectives, (like the way you force me to look at the bigger picture of things) and that sort of opportunity is really cool. We all need something. For my Dad, it’s making wine and watching Glee with my mom. For Ian, it’s writing short stories and teaching just as much as it is climbing.

Self-growth perpetuates growth in others, and that’s sort of the point isn’t it?

Everyone needs and desires to grow. It doesn’t matter if it’s working in the Napa Valley making wine or working in Boulder making lattes, it doesn’t even matter if you’re in some talus field that no one’s ever heard of scrambling around piles of rocks trying to find one that appeals to you. As long as you’re developing in the way you need to be, it’s all good.

These ways in which we decide to approach and embrace ourselves are constantly evolving. As long as we’re brave and open to the process, even when we fail, we’ll be just fine. That being said, for today, and probably tomorrow, I choose climbing. 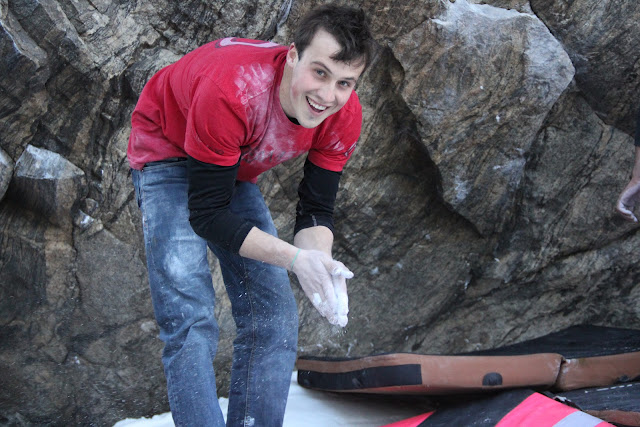 Here's a little video I made of some climbs I did in January.
Month One